Games of Skill vs Games of chance: Is There a Winner? 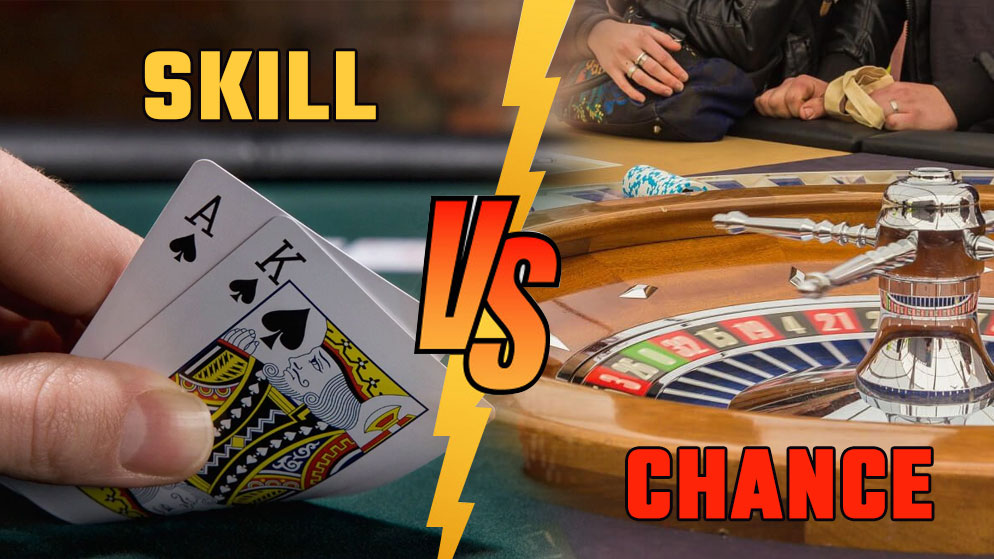 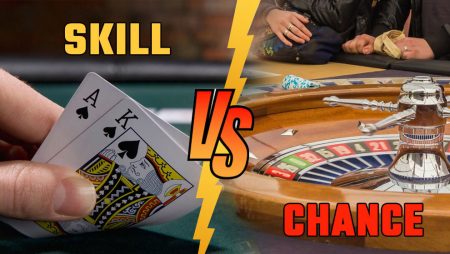 Skill vs Chance games: What does a casino represent? Above all, it represents change and the prospect of good fortune. Hollywood portrays the image of casinos as places of luxury and high-stakes gambling moves that can unexpectedly endow one with wealth. That is, wealth enough to act as the catalyst of any rags to riches arc. But that is just Hollywood being Hollywood. The reality is very rarely so dramatic. But there is also some shred of truth in it. It is theoretically possible to win even the highest skill ceiling games like poker with just dumb luck. But thunder does not strike twice, and luck runs out. Skill is what builds consistency. The casino is a unique site that allows both games of chance vs games of skill to go hand in hand. But what makes the ultimate winner of casino games, skill or luck?

Games of Skill: Making A Skilling

No one can contest the presence of a chance factor in casino games. No matter which casino game you pick, there will be some element of randomness involved. If you look at card games, the deck is unpredictable. On the craps tables, the dice roll with randomness, no matter how good your grip or calculated your throw. But this luck factor varies from one game to another. Those that involve more skill than luck are also less volatile. Plus, casino games skill actually covers even aspects of chance. Dices may be the very symbol of randomness, but there are still dice skills that have you controlling the roll on a craps table. And the dice skill is also something you hone, like swimming or learning to cycle.

The deck games, in particular, tend to lean on the side of skill. Look at blackjack – it is a lightweight game that does not take long to learn. The player directly challenges the dealer’s hand, something purely based on luck. If the dealer goes bust, you automatically win without even doing anything, even in games of skill. So in that sense, you could actually win a round of blackjack without any blackjack skills or even understanding anything about it at all. But even so, experts have tried all sorts of things to implement a strategic framework into it. Blackjack, in particular, is the prime target for card counters, people who use their blackjack skills to keep a tally of the current cards in play. By card counting, you can predict the chances of favourable outcomes as the cards keep coming out of the same deck.

Blackjack is probably the most balanced middle point between luck and skill. You need some good luck to ultimately win, but you can always fold or bet more depending on your skillful predictions. It rewards you for intelligent play, but there is the ever-present luck factor that can stop your streak dead in its tracks.

On the contrary, though, poker is much much more about skill. Like always, there is also an element of luck in poker. But the skill ceiling in almost all of its forms is high enough that people spend literal decades mastering it. Many World Series of Poker champions have noted that they never really stop learning. But you could point at the fact that some naturally gifted people like Chris Moneymaker seem to get it much more easily. Nevertheless, even Moneymaker had put in the hours at the table. Like in all crafts, it takes time and dedication to hone your skills at the poker table. Poker requires many different types of skills – to master the ‘poker face’, to learn how to think mathematically, and to read the flow of the game to the best of your abilities.

Games of Chance: Give Luck A Chance

If poker is at the skillful end of the spectrum, the other end is casino games of chance like baccarat. In these games, luck plays the predominant role. And nothing quite represents the pure essence of casinos like slot machines. They have been a staple of casinos since the mid-nineteenth century, and they are here to stay. By definition, slots are plug and play. No matter whether digital or physical, all you do in a slot game is push a button. The game plays itself, and you win big if you get lucky.

Since slot games are games of chance, they also have the advantage of simplicity. The core gameplay loop is easily adaptable to different scenes. So you have libraries full of myriad slot games in casinos. Whether you want a little Indiana Jones, jungle book, or feeling like something gothic, there is a slot game to fit the theme you want.

Probably the most iconic example, however, is roulette. It does not stray away from slot games in principle. You bet on whether a ball lands on a certain place on a rotating disc. It would seem that the possibility of winning is less than multiple money lines on slots. But proportionately, the ball is likelier to land on your chosen number than you hitting a super rare jackpot on a slot machine.

Sometimes it can be hard to distinguish between games of chance and games of skill. Take a look at bingo – it is basically a simplified lotto. To play bingo, skills are not required. Or so, one would think. But bingo skills do exist. They are indirect traits that govern how well you do over time, e.g., your patience and money management. Onto deck games, baccarat is a good example. Are ‘baccarat skills’ a thing? Your success depends on luck for the most part. But whether you bet on the banker is for you to decide, so your baccarat skills do carry you forward big time.

The key to the distinction, therefore, is player agency. A slot game would be called a game of luck. Sure, you need basic strategy and understanding to not completely lose your bankroll over time. But even so, the actual gameplay does not involve any player input other than the ‘go’ signal. On the other hand, baccarat would lean on the side of a ‘skill’ game.

Skill vs Chance games: Which Road To Take?

Almost anyone would see that games of skill are the way to go. It takes time to build those skills. But in the end, you ensure a higher win rate. You would have a much higher chance to walk out of the casino with profits if you are good at poker. A counter to this would be the massive sums that jackpots tend to pay. Anyhow, that decision is on you – whether you would risk small but secure wealth for volatile, low-chance jackpots. Other than that, the biggest thing that decides your success is your casino games’ house edge skill. All casino games have their house edge. Having the skill to find out the least house edge margin means you know which game statistically gives you the best chances at winning.

Skillful games are the surefire way to make bank reliably. But that is only if you play solely for money. After all, the casino is also a place of entertainment. Often a casual round of baccarat can relieve stress more than the gridlock of poker chess. So if you want to turn in slots for the ‘cha-ching’ noise, it makes when you do line up the reels successfully, it is by no means negligible. Small victories are still victories nonetheless. It is the player who decides what works best for them.