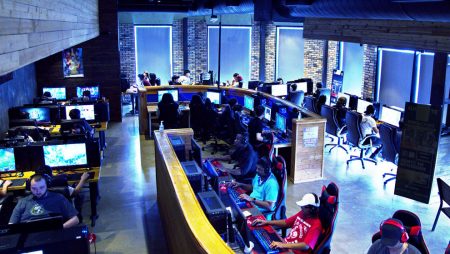 An esports gaming cafe was the last thing you would expect anywhere outside of the top metro cities. As a developing country, video games in India used to be a luxurious hobbyhorse reserved for the privileged elite. However, this was only the case back in the 90s and before. Technology has since become cheaper across the board. Today, it is common in middle-class families to have some form of computer – a desktop, a MacBook, or a laptop. Granted, they are for work more often than not, but PC gaming is indeed a much more common interest than it was a decade ago. Esports has also become a much more recognized form of mainstream sport. In this age, a gaming/esports cafe in India is a great business investment due to various different factors – more so than the US or Europe.

Bangalore comes third if you list the largest cities in India. For a long time, Bangalore has been a very lucrative place to be in. Back in the day, in the ’60s, people called it the ‘pensioner’s paradise’ because many dreamt of settling down in its luxurious societies with lush green parks. During the IT boom, Bangalore became the Silicon Valley of India. Naturally, it is one of the most high-tech cities in the country today. That made it quite the fertile spot for investors. The first iteration of gaming – outside other entertainment centers – was the arcades in casinos. But the first ‘gaming cafe’ as such appeared in Bangalore appeared in 1996 as a CCD (Cafe Coffee Day), which installed desktop computers on two floors. The gaming boom, however, did not happen till the early 2000s, when the first proper gaming cafes started cropping up.

Much of the first wave of gaming cafes before that were individual business ventures that were somewhat tame. But like the Game Space esports cafe in Mumbai and other metro cities, Bangalore also had pioneers like Blitzone as early as 2006. This era mostly had young gamers going to makeshift CS 1.6 LAN parties. One has to remember that this is also an age where gaming was a much more niche scene with complicated affairs like Starcraft and experiments with mods (the prototype of Dota was actually a Warcraft 3 mod). However, organized tournaments were also held as early as 2007. But the 2010-2020 decade marked significant developments in the esports sector. In fact, even a glance at gaming today will tell you just how far it has evolved. Not only does it hold. Likewise, esports gaming in Bangalore has also grown as a mainstream scene.

Gaming Cafe in India – The Chain

Bangalore is the most high-tech city, but the rest of India did not take long to catch up. Like we said earlier, gaming used to be a niche hobby that took much time and investment. But since then, it has become much more mainstream. In fact, one does not need an actual gaming PC to enjoy gaming. Mobile esports games are also very trendy right now. With the success of PUBG and Call of Duty mobile ports, it is possible to game with esports and battle royales from even a budget smartphone. But for the real deal, you need a good rig. At least a mid-end gaming PC is a baseline requirement for high-octane action games like a battle royale. One needs at least 60fps to experience smooth gameplay. But more importantly, low performance means high latency, which can make or break your chances at winning in competitive shooters.

So naturally, many people who cannot afford to buy or maintain a gaming desktop resort to gaming cafes. Now, many of us tend to think of gaming cafes as singular places that offer their services. But there are now many major chains of gaming cafe brands that have multiple branches across cities and states. Many of these also endorse or prefer one brand of hardware after another as a form of sponsorship. Let you play the top esports games at peak efficiency and comfort.

The gaming cafes in Bangalore developed to keep up with the times, and they have nearly always been state-of-the-art. Bangalore is a prime spot for gaming not just because it is a tech hub but also for its large 18-24 demographic of migrating students and young workers in the IT sector.

Clan Gaming is possibly the most revered gaming cafe in all of Bangalore. It is a business run by people who understand gaming, and the lounge is built from the ground up to provide an optimal gaming experience. Currently, it offers over 30 high-end desktops with top tier hardware as well as multiple load-balanced internet connections to ensure low ping times. All in all, Clan gaming is a good choice of cafe for any gamer who wants to get into competitive e-sports sincerely.

The Living Room runs counter to what you imagine the average gaming cafe to be like. Instead of the grunge aesthetics of a lightless casino or basement, it is more like a Silicon Valley residence. The founders of The Living Room cafe built it in 2018 with the vision of a cozy, airy space for a gaming hangout. Indeed, they have nailed the part. Its hardwood flooring and armchairs add much to its charm. It also caters towards console gaming. Naturally, one can easily understand that this place is all about laid-back gaming with friends. If one wanted to engage in esports and such, this cafe is not the right one.

Blitzones Cyber Cafe, also known as Stephen’s cafe, is one of Bangalore’s oldest gaming establishments (estd. 2006). It is probably the gold standard gaming lounge if you are into MOBA games. This is because Blitzone also has the legacy of a sprawling MOBA community, thanks to the many Dota 2 and League tournaments it has held, both external and in-house.

How to Start an esports Gaming Cafe in India

Generally, the actual process of opening an esports cafe is not any different from opening any other shop. You need to apply for a trade license, and meet the other government requirements, register for taxes. It is better to target well-off metro cities. Naturally, the lease or rent costs are high. But the natural clientele pool will more than compensate for that. Otherwise, generally, good business practices also help gaming cafes. They follow pretty much the same principle as casinos. Get the customers hooked, and provide them premium service. Moreover, a good advantage for gaming cafes is they can endorse brands for many benefits. This is why you will often see major gaming cafes endorse NVidia, AMD, and so on.

How to Use Gaming Cafe in India

Gaming cafes are nearly always very welcoming. You will have some kind of receptionist who will help you to a PC in the lounge, and even give you technical support.

But otherwise, there are no ‘rules’ to using gaming cafes. Just be aware that it is a community service. Thus one should not behave in a way that could upset someone else’s gaming experience. Also, it is advisable not to game for long stretches at a time. Remember to take breaks and refreshments every few hours. Happy gaming!